You are here: Home / Entertainment / Akshita Nanda, Nimita’s Place and Satay in Singapore

About Nimita’s Place, The Straits Times and Radioactive Viruses

Success in today’s world means to reinvent yourself, again and again, follow your passion, and do it wholeheartedly. With this attitude, Akshita Nanda, a biologist by profession, published her first novel – Nimita’s Place. She hand-wrote her first and second draft while running a full-time job as a journalist at The Straits Time Singapore. We sat down with the biologist-cum-journalist-cum-writer to talk about radioactive viruses, Satay in Singapore and “Your Place or Mine”.

The novel also looks at human migration, as people from different socio-economic strata move around the world or are forced to move. So many move out of the ordinary, understandable desire for a better job and a better way of life but in most places, the existing population is wary of immigrants. “Your Place Or Mine” seemed appropriate again.

However, the publisher wanted to focus on the fact that the story moves between the lives of two women, both named Nimita. We eventually arrived at the title “Nimita’s Place”, which manages to incorporate all the ideas above. 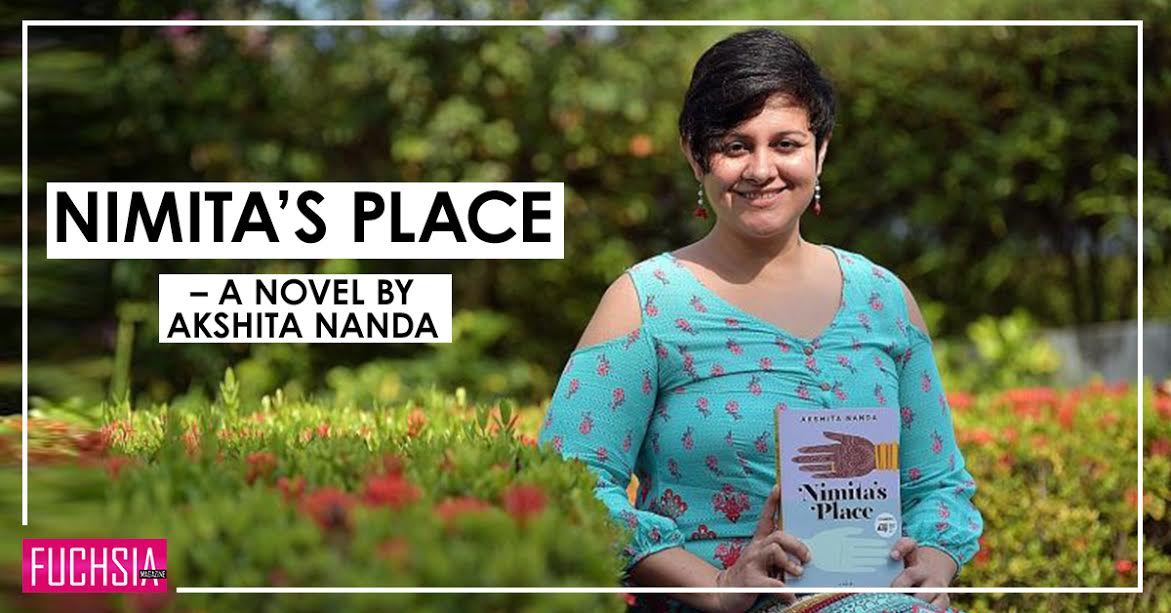 2. How can the women in this day and age relate to this book?

This book is also about food and everyone can relate to that! I love to eat so I peppered my novel with odes to my favourites: satay, biryani, kebabs, mangoes, chai, coffee…

We all need to eat and most of us love to eat. Nimita’s Place is a homage to all the wonderful food from South Asia and South-east Asia that all residents of these regions enjoy.  The book shows how food culture is affected by preferences and dietary restrictions, including religion. However, the fact that we all need food to sustain us, unites us. That’s why a lot of scenes happen around the dining table!

The book is also about weddings and how enjoyable as well as exhausting they can be for families. Weddings also haven’t changed much in the decades separating my two characters. It is an age-old problem that in South Asia, women and men are not seen as “complete” or “settled” until they are married!

In my novel, Nimita Sachdev is a 30-year-old scientist in contemporary Singapore who is focused on her research and career. Her buas (aunts) in India are focused on connecting her with eligible bachelors.

The second character is Nimita Khosla, a 17-year-old in Lahore in 1943. She is adventurous and enjoys tinkering with radios and electronics, not considered usual for a woman in that age. The principal at Kinnaird suggests she study engineering but her parents think it more important that she settle down and marry first.

The novel follows them as they seek to pursue their passions amid all the demands of family, society and real life. I’m sure every reader will see similarities to her or his own life, and laugh and cry along with the characters.

3. Tell us about yourself?

I was born in March 1979 in a town called Pune in the state of Maharashtra in India. My paternal grandparents were refugees from Lahore who first lived in the north of India in Delhi, but later moved down south to Pune.

At age 15, I received a scholarship to study in Singapore at Raffles Junior College, sponsored by Singapore Airlines. Later, SIA and Neptune Orient Lines sponsored my BSc (Hons) in cell and molecular biology at the National University of Singapore. I was a researcher for a while and lived the glamorous life – working with viruses, spilling radioactive material on my lab coat, creating glow-in-the-dark proteins – but since 2007 I’ve been working with The Straits Times, mainly as a correspondent writing about lifestyle, arts and culture.

4. From researcher to writer…

I love science. My Twitter and Instagram feeds are full of biology researchers, NASA, the International Space Station, National Geographic, and farmers! Understanding science and its principles help me to stay grounded in the wave of technological changes washing over society. To give an example, thanks to my training, I can understand lab reports and help friends and relatives navigate hospital visits and doctor appointments. I also know how to evaluate whether the gossip being forwarded on WhatsApp groups is fake news, or not!

I worked in university research labs as an undergraduate and, after graduating, at the National Cancer Centre in Singapore General Hospital. Within a year, I had met a young boy who wanted to study and cure his father’s cancer. This experience, and others made me realize that science education had to evolve to better equip children and adults to handle life and technology. I decided to move into this area and joined educational publishing firms, first SNP Panpac (now defunct) and then Marshall Cavendish. Some of the textbooks and science resources I helped to develop are still in print today and used by students, which makes me proud. (I still work regularly with selected groups of kids via a voluntary welfare organization. I use science projects, games and puzzles to help them with reading and literacy.)

After textbooks, newspapers were the next logical step for me. A journalist’s job is to keep readers aware, informed and engaged in discussing the events that affect their lives. I’ve recently written features on how arts activities are beneficial to dementia patients and can make the caregivers’ lives easier. I have also reported on how schools, museums and galleries are becoming inclusive spaces for people with disabilities.

5. What do you think takes to make a successful writer?

Let’s define a successful writer as anyone who has finished a work of text and is satisfied with it! It may be a 240-character Tweet, or a diary entry that no one else can see, or a poem shared with family and friends, or a self-published novel. Writing to please yourself is hard! The writer Ann Patchett calls writing the act of pinning thoughts to the page, much like entomologists pin butterflies. Readers only see the pinned thought-butterfly and think it beautiful, but the writer knows how much more lovely the thought-butterfly was when it was wild and untamed in her head. Any writer who manages to satisfy herself with her writing is successful.

If we define success as getting a novel published, then luck as much as hard work makes for success. I was lucky to have a supervisor at The Straits Times, Clarissa Oon, who pushed me to write a novel. Other editors at The Straits Times, Helen Chia and Tan Hsueh Yun and Warren Fernandez, let me take time off to craft the book. I was lucky again to have dear friends who ruthlessly edited the first draft of my novel and made me rewrite it to meet their standards and my own. I was fortunate to meet people who agreed to represent me as my agent – Jayapriya Vasudevan and Helen Mangham of Jacaranda Books – and then submitted my novel to the Epigram Books Fiction Prize. I was lucky that the book made it through the selection process to the finals!

6. How did you find time to write a novel with a full-time job as a journalist?

I hand-wrote the first draft of the book and usually made myself write for an hour every day before heading home. I would stop off at a public coffee shop or a library so I could be surrounded by people yet still in solitude. I did the same for the rewrites in 2015-2016.

As mentioned, my editors at The Straits Times were also very supportive. I took time off in 2015 and 2016, which helped me finish the handwritten drafts and then type them up. It also helped immensely that my parents and brother supported me in multiple ways – by doing the household chores, or locking me in my room to ensure that I had time and space to think.

7. Was it challenging to switch roles between being a journalist to writing a novel/fiction?

Very, very challenging. A journalist is a conduit for facts and other people’s opinions unless one is writing an analysis or opinion piece. A journalist focuses on facts such as “this happened when” or “the toothpaste used at this time had this flavor”.

A fiction writer uses facts as a framework but should not be hung up on them. When I started editing my work, I cut so many facts that had taken me hours to research. The work read better in their absence, sort of like the way the air between wool fibers gives the fabric its warmth and comforting texture.

8. How has writing this book or it being published impacted you?

I’ve become deeply, humbly, gratefully aware of the interconnections between the nations of South Asia and the rich heritage we share. I’ve become more committed to bringing us together and hopefully facilitating dialogue through my writing, whether fiction or journalism. We must come together to solve the pressing problems we all face, such as climate change, the lack of clean air and water for our millions, and ensuring access to quality education.

9. Who is the most relatable character for you in this book?

The facts are that I used to work in a lab and that my grandparents were from Lahore. The fiction is inspired by these two facts alone, everything else is an invention, though created out of research. Both Nimitas are very unlike me. I wish I had the dedicated, scientific focus of Nimita Sachdev. I aspire to the grace of Nimita Khosla, and her ability to manage a household and cope with catastrophes large and small.

Nimita’s Place will be published in the UK in March 2019 – see www.epigrambooks.uk – and I’m excited about the novel reaching more of the South Asian diaspora. I’m also hoping that Nimita’s Place finds a place with publishers in Pakistan and India so that more South Asians can read and respond to it.

I’ve also written another novel about beauty pageants and our fondness for long straight hair and fair skin. It is tentatively titled Beauty Queens Of Bishan and is still awaiting a publisher.

11. Besides writing, what else do you enjoy?

I love exercising. I write some of my best work after the mindfulness and endorphin rush that comes while running, or swimming, or lifting weights, or yoga. I ran The Straits Times’ annual ST Run this September, the 18.45km distance, and hope to do a half-marathon next year.

I also enjoy discovering new coffee joints, especially cafes that support books and the arts. Starbucks and Toast Box have been supportive of musicians and writers, so I tend to visit their outlets. I’m also in love with the Book Cafe at 20 Martin Road, and this beautiful new place called The Moon at 37 Mosque Street, started by a young Pakistani entrepreneur, Sarah Naeem.

A few more books with my name on the spine in a world where we have switched to renewable energy. By the by, biryani made in a solar cooker tastes just fabulous. Ask my parents for the recipe!

Falak Amaar Khan is a member of Team FUCHSIA, heading the Fashion section in her capacity as a fashion designer, stylist and choreographer. As a writer, Falak covers fashion, community and entertainment. This super busy mother of two is working towards supporting a cause through her work. She would also love to integrate more into the Singaporean community, and explore the island in a more realistic manner.
Her motto in life? GET ON WITH IT!