You are here: Home / Entertainment / Are We Watching Yeh Dil Mera Only Because of Sajal & Ahad?

This question popped in my head when my mother very casually declared, “Bas, in dono ko dekhne ke liye log dekhte honge ye drama”. And if we weren’t in the middle of an intense to and fro of emotions between Amaan (Ahad Raza Mir) and Aina (Sajal Ali), I would’ve interrogated her thoroughly. That motivation to watch a drama may have an upside – from marketing perspective – but the downside overshadows the positives.

If you watch a show only because you love the leads then you’re setting yourself up for disappointment; especially if that pair has given a major hit earlier. Nothing they do after that will ever satisfy you, because you’re looking for the same magical intensity. That magic was between the characters they played. The new characters, if portrayed right, will also have the said intensity, but of a different kind.

Yes, some actors do share “chemistry” which exists even when they aren’t playing any character and are just standing atop a stage giving away an award – I’m thinking Fawad Khan and Mahira Khan. Similarly, Ahad and Sajal also share a chemistry, which is palpable, even when they’re just casually sitting in the front row looking awkward and dazed.

But when it comes to Yeh Dil Mera, there is more to it than the good looking lead pair.

The romance is marred with negative emotions of revenge and domination. In fact, it isn’t even the focal point. And some people might not be a huge fan of that.

When making YDM, the producer, director, and the writer did bank on Ali and Mir to bring in the audience and their much hyped “chemistry” to the table, but did they realize that this might backfire?

It happened in Aangan when audience blamed the writer for tweaking the script in favour of Chammi (Sajal Ali) and Jameel (Ahad Raza Mir) and sidelining the protagonist Alia (Mawra Hocane). Ali and Mir’s characters, together, had a total screen time of one hour or maybe two in the entire 18 hours of the show; rest of it was mostly about Alia and her struggles. That debate arose because Ali and Mir are amazing performers and whenever their characters interacted, they left an impact.

And it is happening now, as the audience can’t decide whether to enjoy the little romantic interactions between Amaan and Aina or call out the toxicity and turn a blind eye to the chemistry.

Apart from that, there is the evil of expectations.

“OMG! Farhat Ishtiaq, Ali, and Mir all coming together after Yakeen Ka Safar! Can’t wait [Insert hyper ventilation]. Uff, the romance is going to take my breath away!” This was probably the average reaction of drama enthusiasts.

Then, on the other side of the spectrum, were the cynics, like my sister, who rolled their eyes and wondered, “Ahad and Sajal! Again?”

In short, makers of Yeh Dil Mera set themselves up for a two tiered challenge:

1. First was to satisfy the fans and give them something as magical as Yakeen Ka Safar.

2. Secondly, convince the critics to give the show a watch without any bias.

The trickiness of wanting to cash on the popular pair manifested itself first when the teasers rolled out. They were flawed and no one was ready to spare them. Why? Because we, as a nation, are extremely jazbaati and Ali/Mir combo is popular, and with popularity comes responsibility. The audience acted as a gatekeeper, which is great, but without realizing that we often cross the fine line between criticism and hate.

Then Yeh Dil Mera began and it didn’t help that the scenes reminded people of the Indian movie, Baazigar, and the many Turkish shows featuring a hot CEO and an employee. Sprinkle in a fair share of editing flaws, and YDM probably alienated yet another portion of television-watching audience.

But then what is it that makes Yeh Dil Mera trend every week on Twitter and even on YouTube?

The very same reason that might be bogging down the show with undue expectations: Ali and Mir.

Their performances, paired with Adnan Siddiqui, Paras Masroor and Naima Khan, is what makes YDM the show of the quarter.

The effortlessness with which Ali plays the girl next door role amazes me, because that’s the most difficult thing to do on screen: to act real and be natural. And she has done that brilliantly since the very beginning. Her character, Noor ul Ain, has morphed from this young, slightly bratty, girl falling in love, to this woman, who is trying to understand her volatile (to her) husband, and be mentally stable for both of them.

The empathy Aina showed for Amaan in yesterday’s episode was nuanced.

She wants to comfort and assure her husband that she is his biggest support, but she has questions too. She confronts him on the dinner table, but Amaan’s trembling hands and forlorn gaze force her to change the subject to something pleasant like his pet dog Sheru. The look she gives him at the end tells us that she’s not done yet. She’s just giving him time.

And all that was portrayed through Sajal Ali’s body language and her big, beautiful, and very emotive eyes.

Gazing into her perplexed eyes are the vacant, slightly haunting, and sometimes puppy-dog eyes of Ahad Raza Mir, rather, Amaan. While Ali has a decade of experience to back her performance, Mir has the professional training to nail each and every character he plays.

His swift change from psycho to sweet to indifferent to tormented to guilty to sad is what keeps the audience on edge. When he says, “Mein bohat akela hoon mujhe chor ke na jaana”, you feel like wrapping him up in a blanket and singing him a lullaby. When he says, “Yeh jagha MEINE choose ki hai. We need some privacy”, you’re like, “Who died and made you the boss? You had enough privacy in that haunting house of yours.” Then he comes up with, “Mein tumhare qaabil nahi hoon. Tum bohat achi ho”, and you scream, “Finally!”

His dominance angers you. His guilt melts you.

And we’re feeling all these varying set of emotions within a span of two minutes, because Mir has put his heart and soul into it. He is a bit too intense at times, but maybe that’s just me and my love for subtle emotions.
Amaan often reminds me of Dr. Ahmer from Dhoop Kinarey. He too pushed love away as long as he could and felt wronged. The difference is that his rage was controlled, devoid of any theatrics, while Amaan is full of them and that’s probably due to the genre of YDM. Dr. Ahmer was pulled out of his misery by Zoya, but then as soon as he realized that she was the very reason behind his distrust in life, he ghosted her.

In YDM, Amaan is fully aware and actively seeking revenge from Aina’s father, all the while becoming more and more emotionally dependent on Aina.

However, his emotional abuse towards Aina currently makes no sense; especially when he hides her mobile phone at every given opportunity. Consequently, the real culprit, Mir Farooq, remains blissfully unaware.

How will that play out in the larger scheme of his revenge plan? We’ll have to wait and watch.

Meanwhile, the audience has entered the haunting world of Daria Baagh, where Amaan wishes to rekindle Aina’s traumatic memories of her losing her mother at a railway station, and proving that she’s “delusional”.

Sahira, on the other hand, has left the chat. I feel Amaan should have closed that chapter before leaving because at this point his past interactions with Sahira seem pointless.

except for some repetition and loopholes here and there. She’s no Agatha Christie or Arthur Conan Doyle and the revenge plot is nowhere unique, but you keep waiting for the next episode week after week, and in today’s fast-paced world of Netflix, that’s a huge win.

Thankfully, the direction and editing seem to have finally found its ground since the past two episodes, or maybe I’ve learnt to ignore the trousers, tshirts, and bedsheets that magically decide to change themselves within one sequence.

To all the people who aren’t feeling the magic: Take off your Yakeen Ka Safar tinted glasses, and understand that Amaan and Aina are different set of people with a totally different – more unapologetic, less subtle – chemistry, and you’ll truly enjoy Yeh Dil Mera!

And to Ali and Mir: Stop working with each other. You guys choose amazing scripts and different characters, but somehow they spark unwarranted debates online and that casts a shadow on the project. 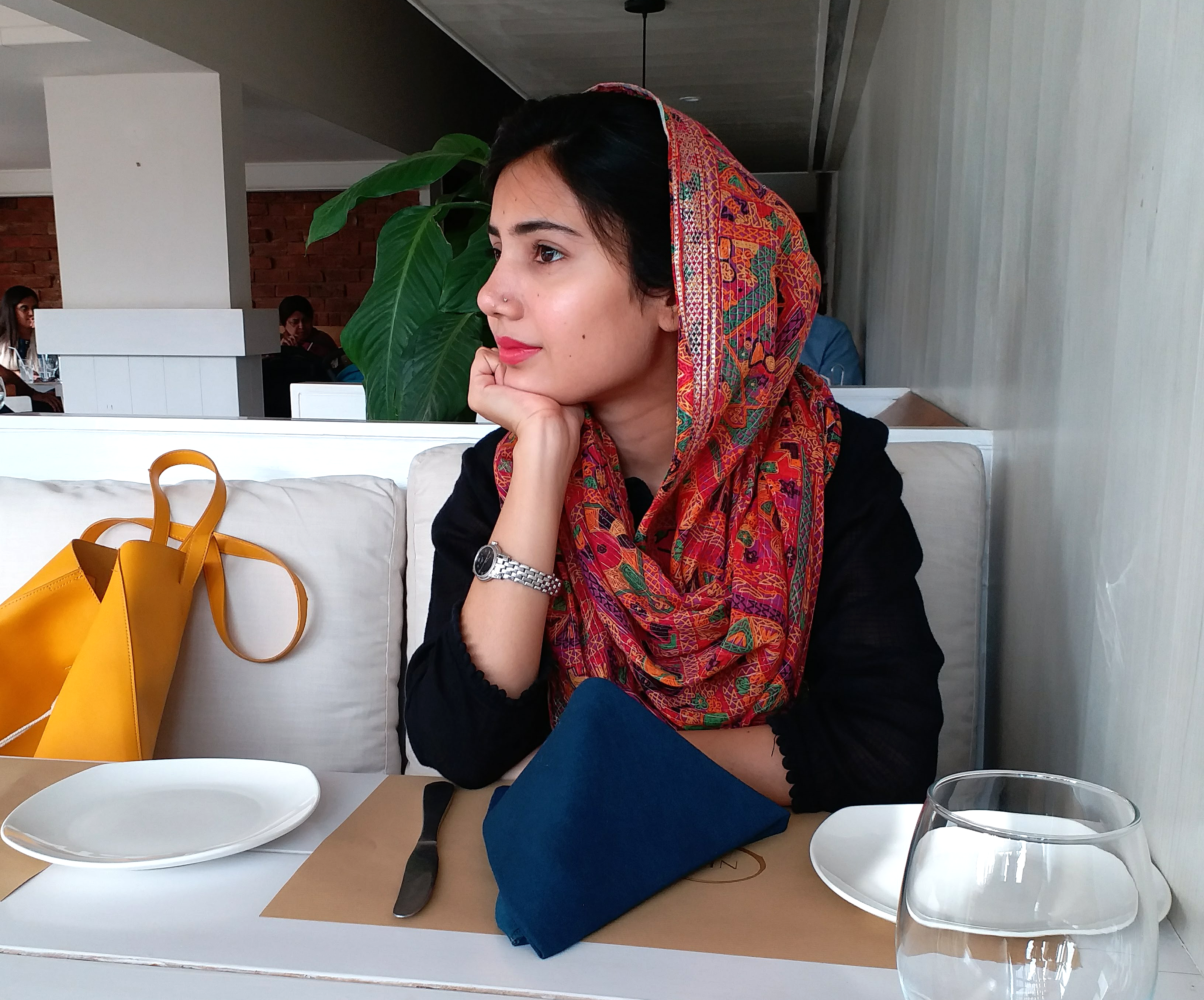 After doing her Masters in Advertising and Media Management, Rozina Bhutto found herself on the web desk of The Express Tribune. SO NOT what she had planned. According to the seniors, she was lucky to be part of the “exciting times” of the 2013 general elections, but she soon found out, that reporting about Imran Khan’s probable death wasn’t her idea of “exciting”. To make her life less exciting, but equally interesting, she joined an entertainment website as a Subeditor and left it as the Features Editor.

Her next stop was Women’s Own, where she served as the Managing Editor, before finally landing at Limu Studio. It was here that she found her true calling as she dabbled in various arenas of digital content creation. But the writer in her felt ignored, so here she is! Oh, and she also has a diploma in Interior Design and loves anything and everything to do with fashion.